(Psst, I’m going to be at Seven Sentences with Maggie Stiefvater in Nashville on April 2nd. If you will be, too, pop in and say so! Let’s meet up!)

When we last spoke about this issue I was full of hope and excitement, having passed through a hard, dark chapter in my life. Or so I thought.

I regret to inform you that my depression made a comeback at the end of January. I countered with medication, which at first seemed to help, but then sort of… didn’t. Unfortunately my doctor’s office had to reschedule my follow up appointment so I spent about a month going through the worst episode I’ve experienced so far. Not getting it right the first time and having to do tweaks is perfectly normal, but it also super sucked.

One of the questions they asked in my appointments, both with the initial therapist and later the doctor is, “are you experiencing feelings of hopelessness?”

And my answer at the time was… no! I had hope for the future, and I acknowledged these feelings I’m experiencing aren’t normal or reflective of my regular self/life, and that I am both able to and willing to get help for them. I felt confident the doctors and I could handle it together.

But I thought more about that question as I witnessed myself living with depression, and analyzed how I felt and acted. I thought about the nature of hope, and about all the books I read (some of which were incredibly influential) where hope is considered a driving force of life and humanity. And how, very slowly, bit by bit, day by day, something in me was eating away at my hope.

The future once was something to look forward to, something bright and exciting. A climb. But over the past month it seemed like a meander over flatlands. Repetitive, boring, unfulfilling.

As a writer I strive to put words to these feelings, and accurately describe what I’m experiencing.  One of my breakthroughs recently is that depression doesn’t sap my energy — it takes away my stamina instead.

I had the energy to accomplish something, but the driving force to get there was gone. It took an external pressure, like an impending deadline, to get me into gear. And if there was no external pressure, something like cooking healthy meals, exercising, doing laundry, and sometimes even showering just didn’t get done.

But it wasn’t all doom and gloom. I had good moments, hours, days. And even in the throes of it, I am so grateful that I’m able to remain functional and otherwise physically and emotionally healthy. And I’m able to keep the faith that this is temporary, and it will get better. I am so, so lucky that my life is otherwise stable and drama-free.

An interesting side effect of depression is that it didn’t leave me any energy for non-essential concerns, or playing mental games with myself. Through inability to exercise and emotional eating I gained back almost all the weight I lost a few years ago. That was a disappointing thing to realize, but I also care less about it than before. My response to discovering my stomach isn’t as flat as I like is now, “well, whatever, everyone can just deal with it,” instead of obsessing about it all day. I found it was easier to send emails asking for favors, or to say direct, firm things to people. I guess the depression made me less self-conscious, and I appreciate that. Silver linings!

There have been some other interesting and positive things to come out of this experience. After I made the announcement on my blog, several people reached out to me to share their own experiences with depression. Mentioning it at work or in public has led even more people to open up in confidence, which is so wonderful and helps me feel more normal. There’s an invisible network of depression-sufferers out there, and so far they have all been warm and encouraging :-)

I was particularly grateful when a relative reached out to share they’d had the same experiences, down to being able to detect when their depression starts and stops. What a relief to hear that! Apparently this ‘episodic’ depression is rare and unusual, and several people and even doctors met my descriptions of what I felt with skepticism. But I’m not the only one!

I hope that being open about what I’m going through will help reduce, even in some small way, the stigma associated with depression and other mental illnesses. Perhaps if I’d known I had blood relatives who have gone through this I would have recognized what was happening earlier. Not to imply anyone did anything wrong here — I live states away from the core of my family and am relatively young myself. I mean, when is it ever a good time to sit down with a relative you see maybe once a year and tell them your mental health history? But on the other hand, I know about my family’s physical health risks — the history of cancer, BRCA status, heart disease, etc., but no one ever talked about mental health trends in the family. I want to make sure my little sister knows what I’m going through, and what it feels like, in case this happens to her someday.

And look, talking about this is… risky, I know. I don’t want depression to define me, or for other people’s internal prejudices or misconceptions to affect our interactions, especially at work. It’s awkward, too, sometimes. But on the other hand, to my knowledge no one has treated me differently, and I haven’t suffered any negative consequences by being open about this. That’s a wonderful thing, and I’m glad for the courage of everyone before me who disclosed stuff like this, when it was much harder and riskier. I stand on their shoulders.

Thankfully, when I could finally see the doctor they got me some help and modified my medication. As of Monday I’m feeling so, so, SO much better. I was able to get back on my healthy diet and start running again. I also finally feel ready to confront Shotgun Girl edits once more.

Over the past month I didn’t write very much, because Shotgun Girl was with some amazing critique partners, whose time and attention have been a marvelous and generous gift. They say it’s ready, you guys! Just one scene left that needs some tweaks. I took the time off to read a ton and tentatively dream about my next project. I like to have something in the wings even while I should be focusing on Nameless. Shotgun Girl took two years to incubate and I don’t have another project queued up like that, but lots of faint ideas I’ve been waving at distantly for several years now. Maybe one will come forward and announce itself soon.

I’m not sure where my mental health will go over the next few months, but I did want to disclose it’s been hard to stay active on social media. I also can’t seem to reach out to people very much, but if you get in contact with me I can enthusiastically respond in kind, so feel free to say hey.

Also, if you know of any un-put-down-able thrillers, please recommend them to me!

I loved Gone Girl by Gillian Flynn, Pretty Girls by Karin Slaughter, and The Winter People by Jennifer McMahon.

Also also, is anyone else so excited to read Strange the Dreamer by Laini Taylor? My pre-order came in this week but I haven’t even cracked it yet. I know it’s going to be so good I want to savor the idea of reading it just a little longer.

PS: Look how big and pretty that Gracie-dog has gotten! She’s gained 20 pounds and grown much taller since we got her at the beginning of December! 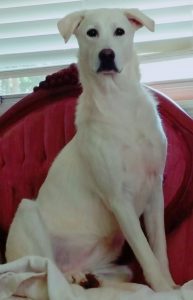