The past couple nights I’ve had dreams of both my cat and my littlest sister. I bought my cat when I was ten and my mother was pregnant with my sister, so they share a birth year and are naturally somewhat linked in my mind. It really wasn’t surprising, considering our upcoming trip to New Zealand, and my cat’s rapidly declining health. I had a big decision to make, and my subconscious wanted me to work through it.

On Wednesday I made the incredibly tough call to end my cat’s life.

When I was ten, I decided I wanted a kitten for my birthday. We’d had other family cats, and in fact I technically owned a cat already, but I’d seen a cage of kittens at our local ranch and feed store, and was smitten. I had $30 and some change saved up in an old Nesquick bunny jar, and kittens were only $5.

The kitten I’d really wanted was an orange and white tabby, but he wasn’t friendly, and hissed at me. Not to mention he was long-haired, and we already had several long-hair cats, so my father had pre-emptively nixed another one. That left the third kitten, a short-haired tortoise shell who seemed friendly enough.

You guys, she was my feline soul mate. 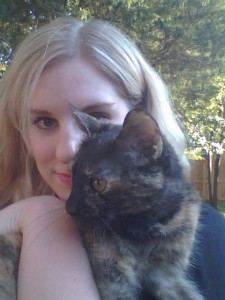 Her named started out innocently enough as ‘Kitty’ (despite being a fledgling writer I wasn’t very imaginative with names; I’d like to submit my horse statue named Princess Mare and a taxidermied medowlark named Beakfeather as evidence), but over a variety of nicknames eventually settled on Kitten.

Kitten wasn’t like a normal cat. After her kitten phase she never played, and she was also immune to catnip. But she loved me, even when I lived at home and wasn’t the primary food-giver, and she loved being around me. She was a talkative cat; she would chirp, and trill, and I learned to do it back to her. It was our greeting, our call for attention to each other.

I can’t over-emphasize how sweet she was. Always cheery, always trilling when she walked in a room…unless there was another cat around. I’ve cat-sat for a few friends, and Kitten always shocked us with how vicious she would get. Growling, hissing, the whole gamut. But that was nothing when we’d go to the vet. I heard that cat make demonic sounds I didn’t even know were possible. I’d sit in the examining room while they had her in the back, feeling terrible for her but also unable to stop laughing because she was just so ridiculous.

But in general: a good cat. 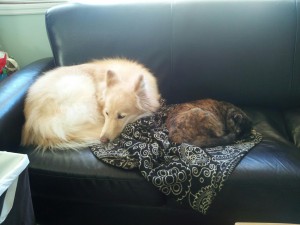 My family always teased her for being a little on the dumb side (they never let me live it down the time she walked into the glass screen door… and then did it again), but out of all the cats we had in the Washington house, she was the only one who figured out how to climb the lattice to get on the roof, no doubt saving herself from death-by-coyote, as had been the fate of some other cats.

Kitten moved with me from Washington to Illinois, and I drove her and the other family cat down from Illinois to Alabama (a smelly, 10-hour ride that ended in a bath for Kitten; I’ll leave the details to your imagination). When I bought a house and moved out from my parent’s I was so excited to bring her with me. It had been my plan, you see, that when I eventually moved out Kitten would go with me, and now it was actually happening. She was going to live with me and we would be together in a place of our own. Well, with Chris. But you know. ;-) 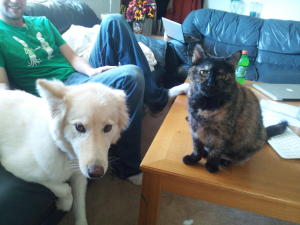 I know she loved the past five years at my house. Instead of an inside-outside cat she became only an inside cat, with occasional visits outdoors. Kitten went through weird phases where her patterns would change every few months; some months she insisted on sleeping by my head at night, other times by my feet, and sometimes she refused to sleep in the bedroom at all. She and Chris became special night friends, as she would come visit him while he was up late studying, and he learned she had a fanatical obsession with cheese-flavored products, specifically Doritos.

He is probably the reason she once ballooned into being quite a fat cat, but after a wakeup call by the vet we got her on a diet and she returned to normal size. 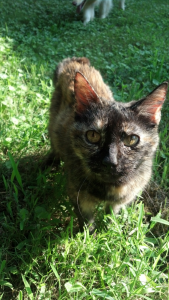 But last year, probably around this time, her health started to fade. She lost her appetite. She couldn’t keep food down. She became unhealthily skinny. In January I took her to the vet hoping it was just a regular sickness, and the vet raised the idea of cancer. Blood tests confirmed it; cancer, probably of the intestines. The vet gave her two years, at maximum, with treatment.

I cried for days. I love her so much, and I’d dreaded this news for basically the whole time I’d had her. I decided to pursue treatment, administering chemotherapy pills to her. The great thing about cat chemo, I learned, is that it’s not like how it is with humans. Kitten wasn’t in any pain; in fact suddenly I had my old cat back! She was spry, and cheery, and chirpy. Her appetite returned. She put on weight.

All this time I thought, I just want her to make it until spring.

And yet, we were struggling with some bathroom issues. Kitten’s never been an especially catbox-savy creature, and the problem just got worse. Eventually I couldn’t keep her in the house anymore, and she was relegated to the carpeted garage. Also, the deterioration in her legs remained unchanged, and she walked stiff-legged, legs sliding way from her control on slick surfaces.

When the weather changed, Kitten was able to go outside every day and sleep in the sun. She loved this. All spring and all summer, every day there wasn’t going to be rain, she was outside sleeping on the patio. She came in for meals, but immediately after she’d jump down and run to the door, begging to be let outside again. 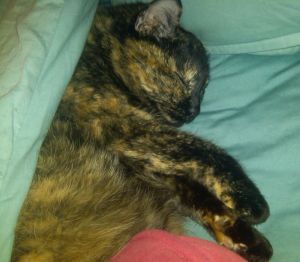 This made me happy, too. It was a return to her childhood on the farm in Washington, where she was mostly an outside cat. Her favorite spot was a hollow in the grass beneath one of the blueberry bushes; I could always find her there if she wasn’t anywhere else.

In the middle of summer though, I decided not to pursue another course of treatment. The chemo pills themselves weren’t that expensive, but the weekly vitamin shots, the vet visits, the special food, etc. was really adding up. Plus we had the bathroom issues, and I was dreading the autumn and winter where she couldn’t go outside. The garage isn’t insulated or heated, and although this early spring we’d used a space heater sometimes when she had to be out there, that wasn’t a safe option, for either her or us.

Lastly, as the vet put it, she wasn’t a part of the family any longer. I could bring her inside to pet and cuddle, but she had to be watched every second, because she’d urinate without discretion on practically anything.

The facts were, my little kitty was coming to an end.

Last Thursday I came home from work to find her barely able to walk she was swaying so much. I figured something must have happened to her, a stoke perhaps, and something in my heart told me this was the beginning of the final chapter. Perhaps coinciding with this new struggle, she flat out stopped using the catbox at all. Even though the swaying issue seemed to get better (and by better I mean a return to her regular leg probalems), on Monday I made the call to the vet and scheduled a consultation on Wednesday.

My main hesitation was that I’ve never had to make this kind of call. With all my other family’s pets, either they were taken from us in an accident or predator situation, or something happened so suddenly that the decision to put them down became one of immediate mercy.

But Kitten? She had her issues, but mentally she was all still there. She wasn’t in any obvious pain. She still ran, albeit with stiff legs. She still attacked her food, not like last time she was sick when she had no appetite. She was bright eyed, and still chirped to see me, and purred and cuddled. Yes, she was confined to the garage, but I still saw her, and she got to sleep outside every day in the sun.

Except I’m leaving the country for a week and Chris works late, and he doesn’t know her well enough to pick up on all the subtle changes I would. Except the weather is changing. Even down here in Alabama where it’s still in the 80’s, by the time I return from New Zealand the last of the warm weather will have passed through. The rain will start. She’ll be trapped inside, with no bathroom etiquette, sequestered from the family and still losing weight, still losing muscle in her legs.

But still. We weren’t at the absolute last point. And therein lay my hesitation. How could I, her mother, her owner, her friend, decide to end her life when she still had some good days left?

I had the chance to give her what my other pets never had: an ending on a good note. One last good day. Before the pain took over. Before the legs gave out. Before the vomiting started again. Before it hurt to move because so much weight had been lost. 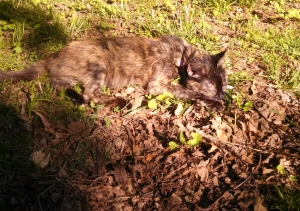 I left work early, and found her sleeping outside in the shade, perfectly content. We cuddled together on the couch for an hour while she purred and burrowed into my lap. She rode on my lap, still purring, while Chris drove us to the vet. Our vet is a wonderful woman who I know would only agree to this if she truly thought it was time. And she did.

It was quick, and it didn’t hurt. I was there to lay her head down for the last time. They folded her into a special box and she looked so natural. My good, sweet kitty, curled up as if sleeping.

My father has buried all of my pets. This was the first time Chris was there to assist with digging the grave. It’s in a beautiful spot, out on my parent’s property, on the line between fields and woods. My sister chose it when her horse died last year because in the spring a dogwood tree lights up the area with gorgeous white blossoms. My mom and sisters were there, all very supportive. We cried together.

I’m so glad I could be there for Kitten her whole life. It was just chance that she was the one I selected at that feed store, and I’ve never enjoyed a better serendipity. She was a wonderful companion and friend, and I will miss her dearly.

Hug your furry friends for me,