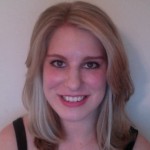 I knew I’d wanted to write for a good majority of my life, but I didn’t realize how far back the inclination went until I stumbled upon a container of all my art projects from elementary school. It turns out I’d been telling stories for years before I actually decided to be a writer. One of these stories was a fantasy ‘book’ entitled DRAGONS AND GUARDS DON’T MIX, a sweeping epic of nearly a thousand words with romance, intrigue, betrayal, battle, witches, and dragons.

I was in third grade. I remember working on this book day after day, carefully making the perfect illustrations and working through several drafts of the stories. The rest of my class was doing the same, and at the end of the project we turned them in, along with the rest of the school, to a group of traveling performers called The Imagineers (Now that I’m thinking back on it, how weird is it that there was a traveling group of performers going around to elementary schools? What is this, 1500’s England?) Out of the whole school, they picked three stories to make plays from, and one of them was mine. So, at the age of 8, I got to see my work on the stage for the first time. They modified the story a little bit, and I remember being slightly put out, but still, how cool was that?

Going through that container of my early work, I remembered all this and was pleasantly surprised to discover I’d been working in fantasy for a lot longer than I realized. And today I’m excited to share the story with you.

Behold! The first fantasy book I ever wrote: DRAGONS AND GUARDS DON’T MIX 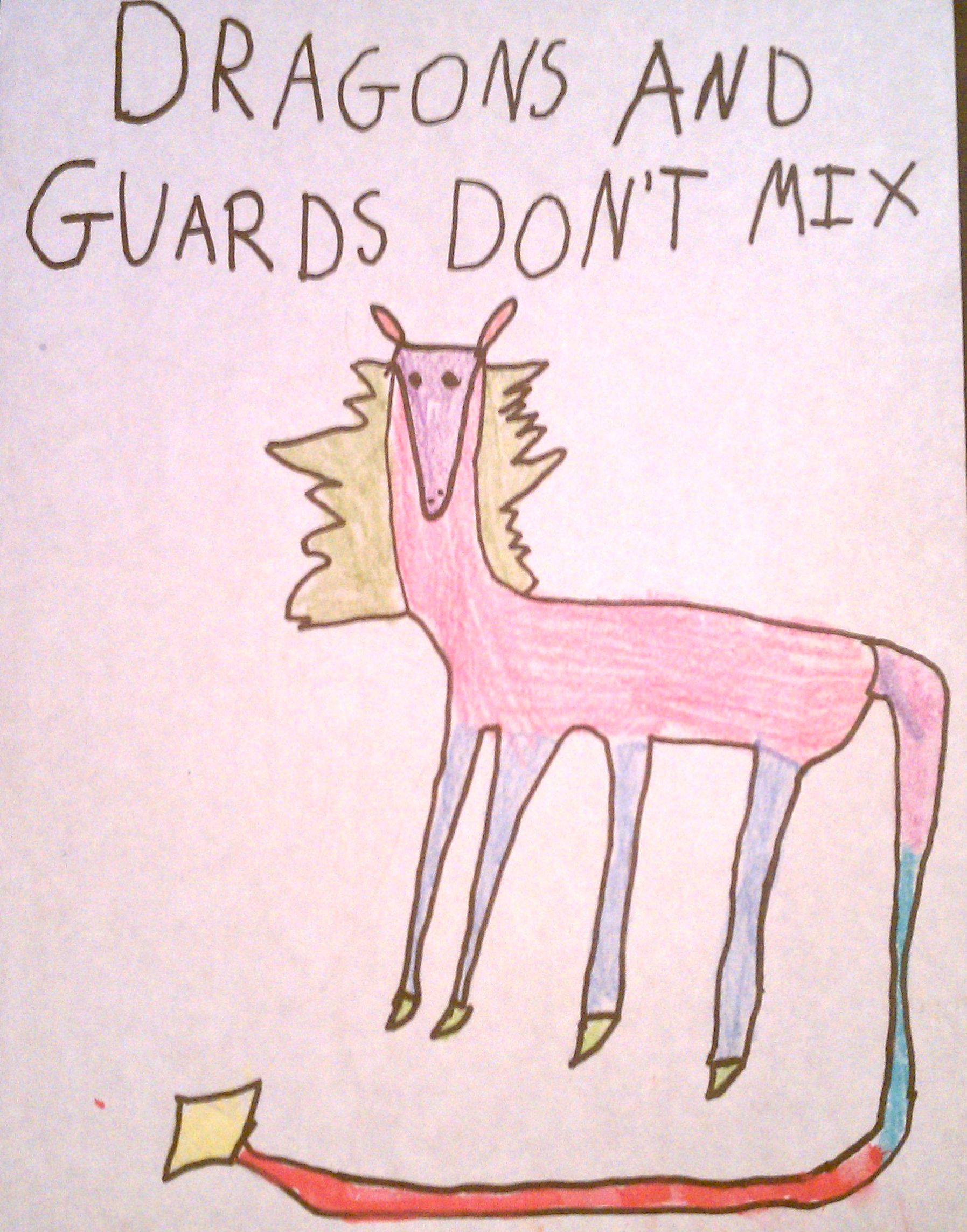 ONE day in spring, a long time ago, a guard came to the castle of King Hubert and Queen Darlie, looking for a job. Poor King Hubert and Queen Darlie, little did they know that the guard had planned to take over the castle! Moni (the guard’s name) had been spying on the castle, and knew that they had no guard to guard the castle. So he figured that if he came looking for a job, that they would give it to him. He also knew (from his experience being a guard) that when the King and Queen went away they would leave the Kingdom to be ruled by, until they got back, to the guard who guarded the castle. So, on with the story!… 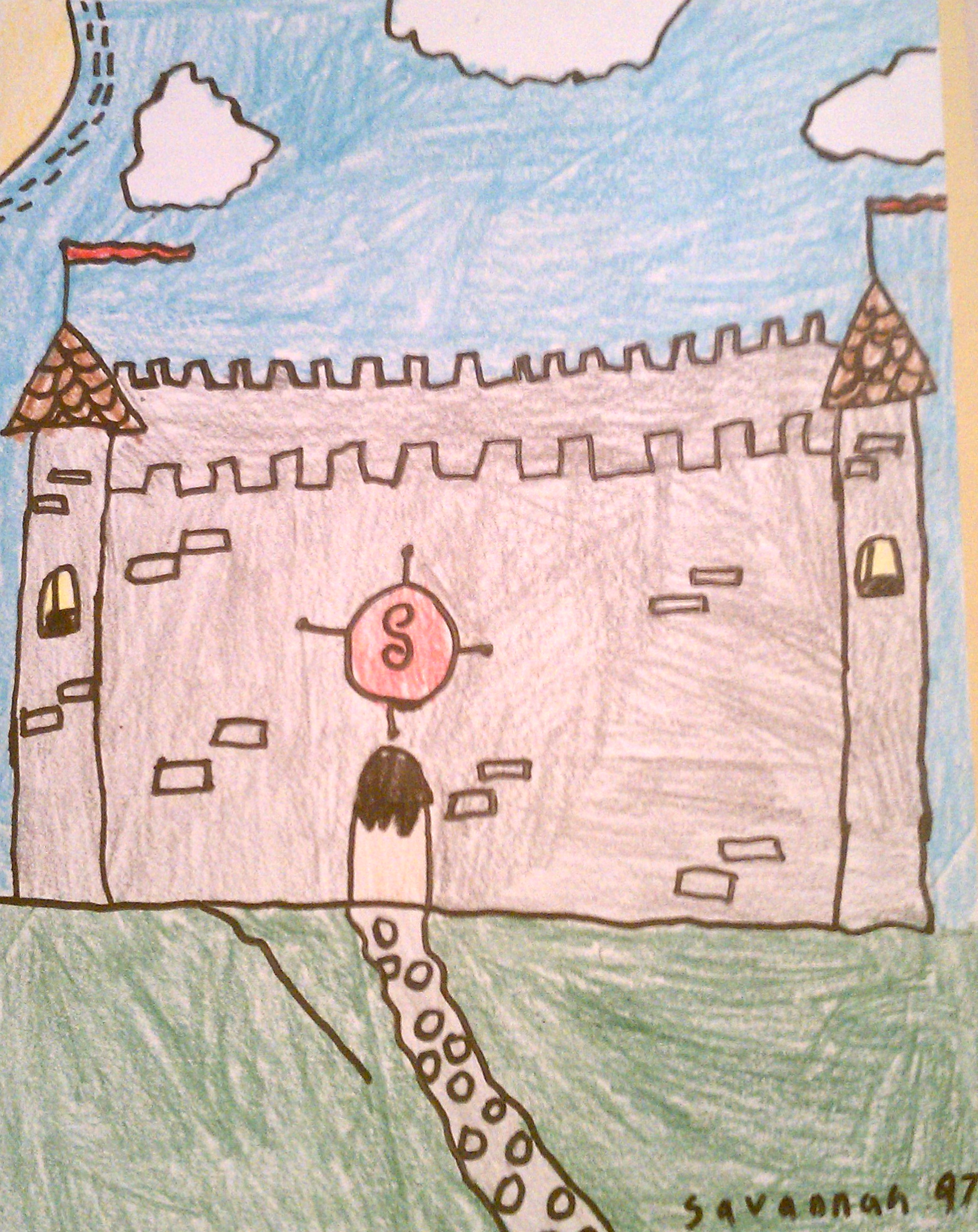 The King and Queen had a daughter named Isabelle. Monti had planned to take her as his wife. Isabelle wanted a pet dragon. Monti offered to go and buy the dragon for her. And she said, “I’d be happy if you would. While you’re out, could you pick up some groceries?” She handed him a list. It was as tall as the princess standing on the guard’s head! “It seems like a lot, but” he went on quickly “I’m sure the dragon you’re getting will help carry them.” Monti said.

While walking to the pet shop, Monti said to himself “You are so sly Monti. You pretend to be a guard, you know that the Princess wanted a dragon, you go get the dragon, your friend, who will pretend to be the princess’s pet, and then you and the dragon can rule!” 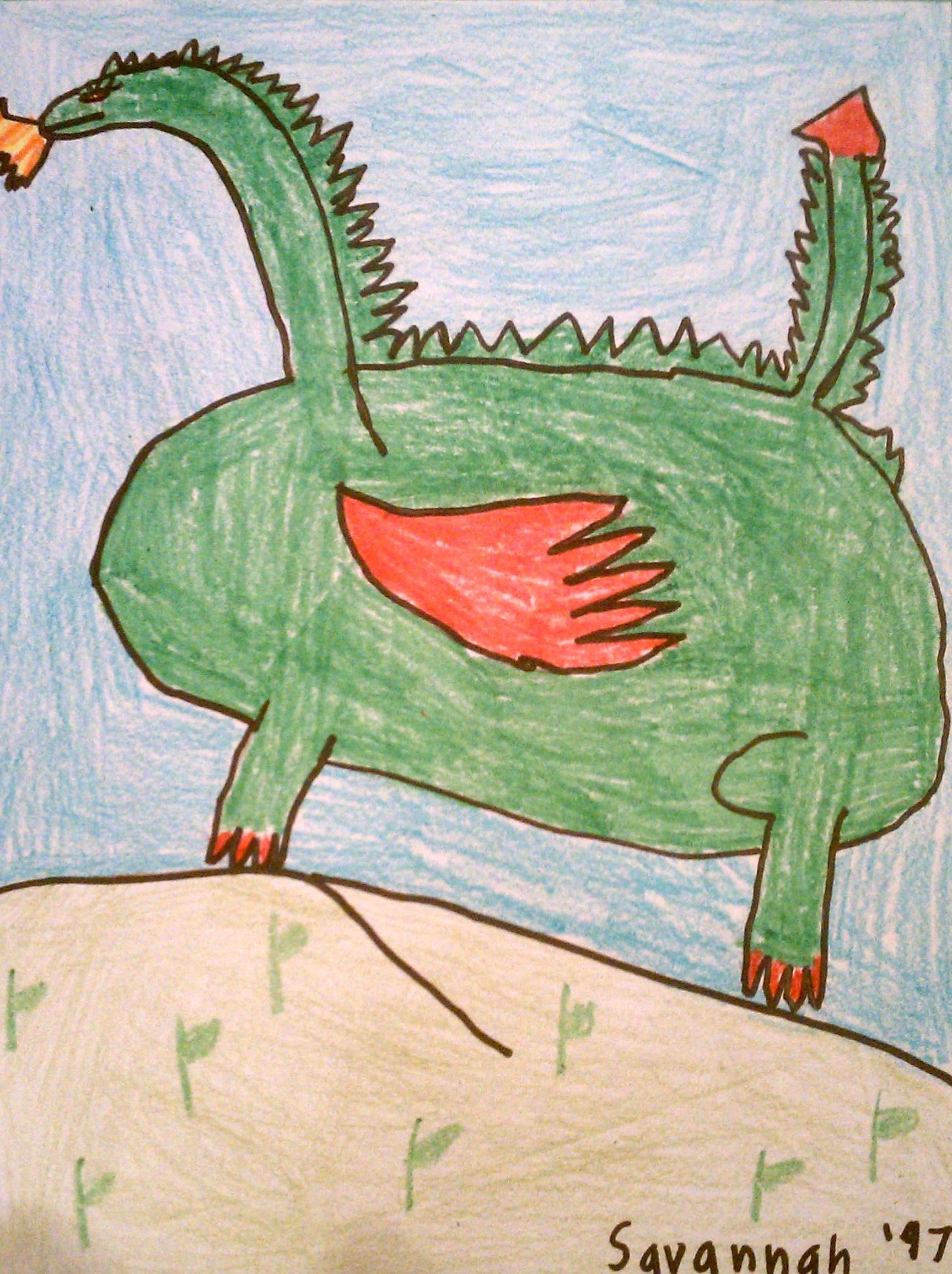 When Monti got to the pet shop he said normally “I would like to buy a dragon for the princess please.” The storekeeper said “Dragons back here sir.” Monti followed the storekeeper into the back of the store were HUGE dragons were in tremendous cages. Dragons were eating, sleeping, drinking, fighting, and resting. The storekeeper led Monti through the mazes of cages and showed him one by one the dragons. Monti pretended to be interested in every dragon, and asked questions. When they came to Lighting (the dragon Monti was going to rule with) Monti said affectionly “I’ll take him.”

So the storekeeper took the Dragon out of his cage. Lightning had green wings and a green body. His eyes were blood red like his wings. The tip of his tail was shaped like an arrowhead. It was also blood red. Lighting’s fingernails were a very, very dark red, and his eyebrows were coal black. When Monti paid the storekeeper, they left. Then they went down to the grocery store and got all that was needed. Monti loaded the groceries onto Lightning, and got on him. Lightning flew into the air saying “Hold on!” Lighting was a talking dragon. 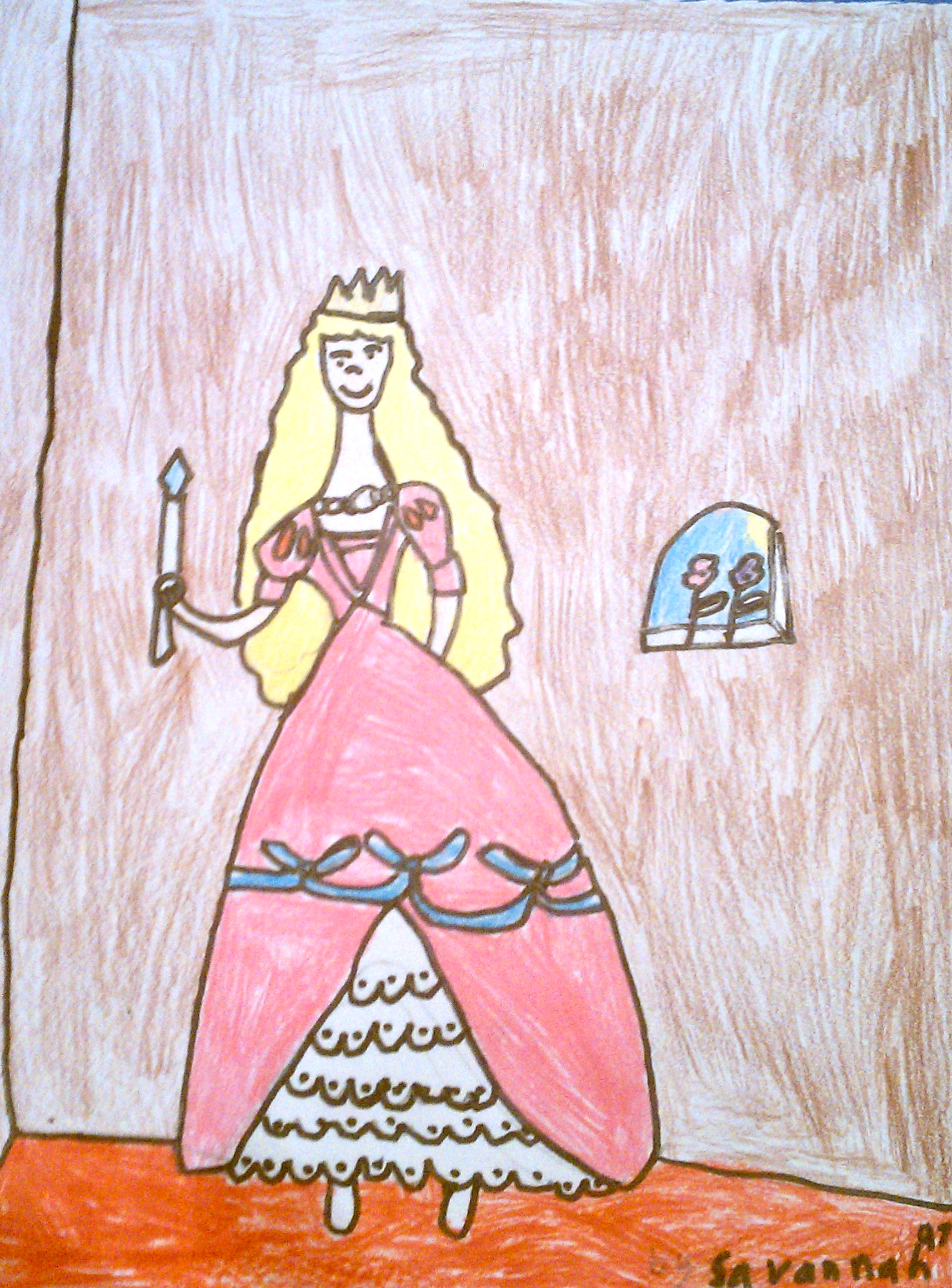 They talked about their plan to rule all the way to the castle. Lighting landed by the castle and walked over to the kitchen window. There, they handed the bags to the cooks and left that side of the castle. Lighting walked to Isabelle’s tower. His head just reached her balcony. Monti climbed onto Lightning’s head and stepped into Isabelle’s balcony. There, he called to her. When she came out, she asked him how he got to the balcony without going through her room. Then Monti stepped aside. The princess gasped, then said, “He’s beautiful!” 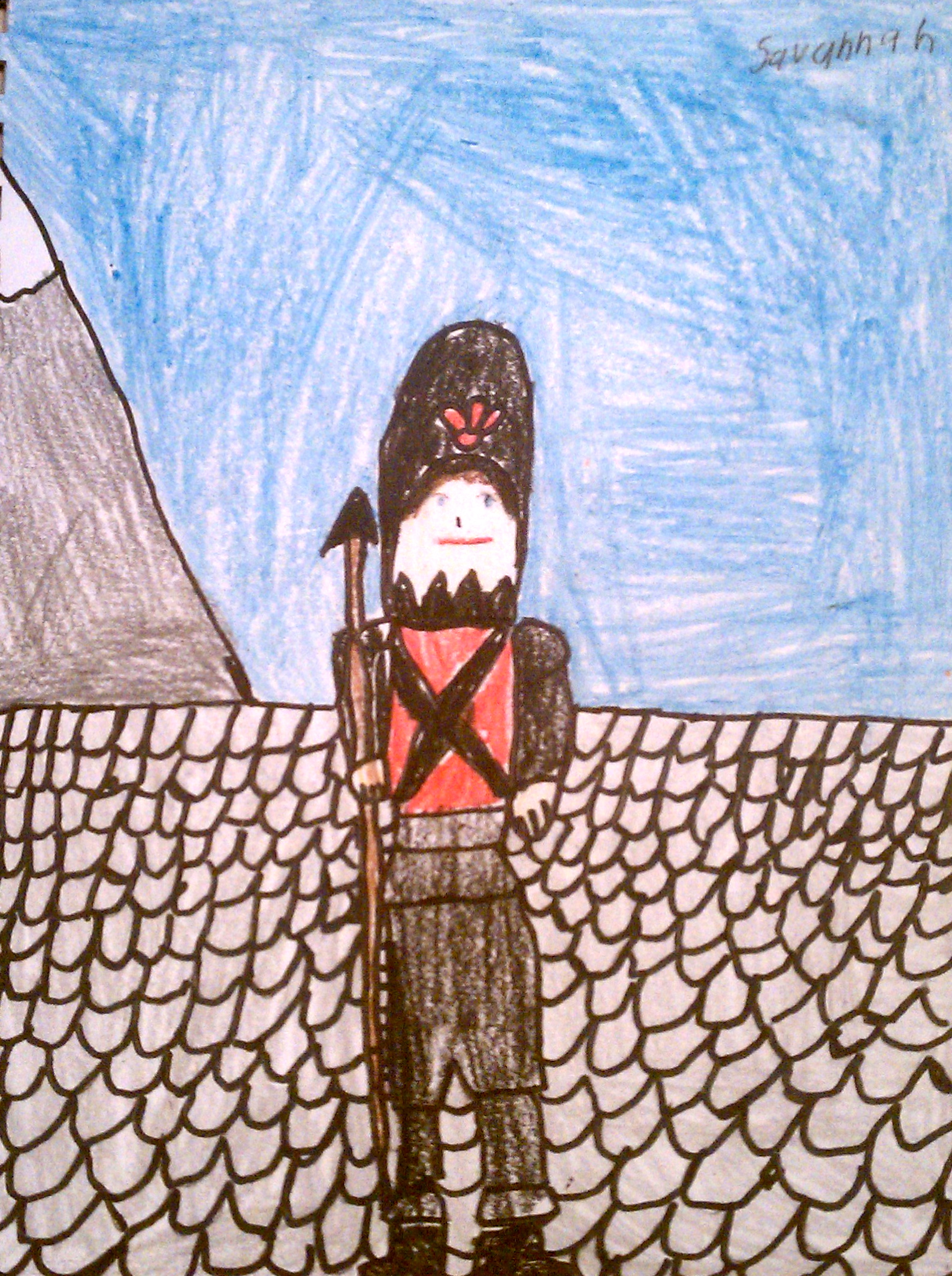 To the princess’s surprise, Lightning bowed and said in a respectful voice “Pleased to be your pet your highness.” Isabelle said “What’s your name?” in a quite surprised voice. “My name is Lightning,” said you know who in a soft voice. “Would you like to meet my parents?” Isabelle asked. “I’d be honored.” Lightning said.

After Isabelle showed Lightning to her parents, King and Queen both held Monti back to tell him that they were going to Europe. They told him that they had to settle a contract there. They were going tomorrow morning. Monti was so surprised. He hadn’t expected this so soon. As soon it was night, Monti made his way toward Lighting’s cave and they discussed matters. When they woke up, the King and Queen were gone. Monti entered the castle. He ripped up King Huber’s rules and made new ones. The marriage was to take place the day after tomorrow. Unluckily, the King and Queen arrived a day early. The first person to meet them was a servant girl. She told them all that had happened. After that, they gathered a small army of townspeople, and went into the castle. There, they caught the villains, and tied them up.

CHAPTER 5: REVENGE, AND A HAPPY ENDING

They went to the town square. Townspeople had gathered there. In the middle of it, there was a launcher. It looked like a teeter-totter. But instead of having seats, there were bowl-like seats. Then the friendly giant held down one end of the launcher. Lightning was placed inside the bowl on the other end. Then the friendly giant let go of the launcher, landing Lightning easily. Then he gave a running start and jumped onto the other end of the launcher. Lightning flew into the air and out of sight. The friendly giant had launched Lightning into space!!! A minute later, ashes came falling form the sky. Lighting must have burnt something. The witches were delighted when the King said they could have Monti for experiments.

And that’s why dragons and guards don’t mix.

Thankfully my storytelling skills have gotten a lot better (I like to think), but this story still holds a special place in my heart. :-) Also I have no idea why I thought dragons had eyebrows. None at all.

13 thoughts on “Teaser Tuesday: The First Fantasy Book I Ever Wrote”