I won’t hold you in suspense — I’m working on Nameless again.

I officially finished edits on The Cobworld on 6/29, and immediately launched into reviewing the Nameless draft.

After around 2 years away from serious work on the draft, reading it again was a magical rediscovery of the story and characters. Little plot twists I forgot I put in, hints I’d begun weaving for conflict later on… Finally I feel awash in new energy and enthusiasm for the project. Gone is the dread and the panic and the obligation. Now I want to finish this story because it’s so good you guys omg and I can’t wait to share it with you.

When I made the update last November about my current feelings on Nameless, the responses I received publicly and privately were so supportive, and I appreciate everyone who reached out to say something. But I also had this revelation… Why am I so worked up about disappointing fans of the original story, when in reality you guys would account for only a very small percentage of all of Nameless’s potential readers? (Not to mention how cool you guys are with the potential changes). I realized the world at large isn’t going to be judging me; they’re only ever going to see the finished draft.

And so I was able to let go of all my internal negativity, and this feeling like I had an obligation to hold on to parts of the story that had always been there. Re-approaching the story now, I have this fresh energy and motivation. It’s so clear to me what must happen, and because of all the hard work I’ve put in on other books over the years, I know I have the skills to do it.

Obviously writing always seems easy during the planning stages, and I’ll confess that endings remain my kryptonite, but I have around 50k-ish left before I have to fight that battle, and plenty of skirmishes to get my confidence up before then.

Being married is exactly the same as not being married, except now I get to practice a new signature every time I sign a receipt. Honestly the most different thing about being married is how everyone else treats us as a more legitimate couple, which borders on offensive in some instances. I still have trouble referring to Chris as my husband and have called him boyfriend more times than you’d think, but he doesn’t mind, because it’s not a big deal. Anyway, we’re deliriously happy and therefore there’s not much more to say, so I’ll stop. 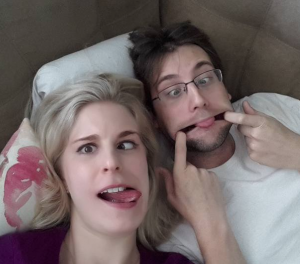 I have a new cat now, a small and feisty goofball of a cat, that appeared outside my office building one morning. She was obviously dropped off by some heartless soul, and had drying teats to suggest a recently weaned litter of kittens. Now she’s all fixed up and running wild through the house, amusing us all with her antics. Kitten was a very different sort of cat; she never played and was immune to catnip, but Mia is a cat’s cat. It’s such a joy to watch her play with toys and even things that are decidedly not toys, such as my pen when I’m brainstorming: 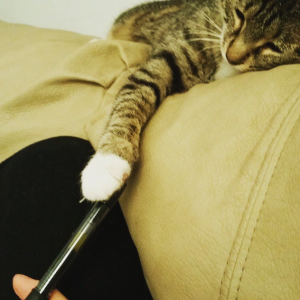 I knew the right cat would come along when I was ready, and Mia is undeniably the right cat. Get this — she had no fear of Bella when I brought her home the first time. What kind of cat isn’t afraid of a big, wolf-looking dog that is very interested in smelling them immediately and up close? This crazy girl.

For all my American friends, have a safe and happy 4th of July!

PS: I’ve migrated to using my official author FB page instead of my personal page, so please Like at will.

PPS: I’ve added a link to my instagram on the right, if you’re interested in seeing more pet pictures from someone you kind of know on the internet.